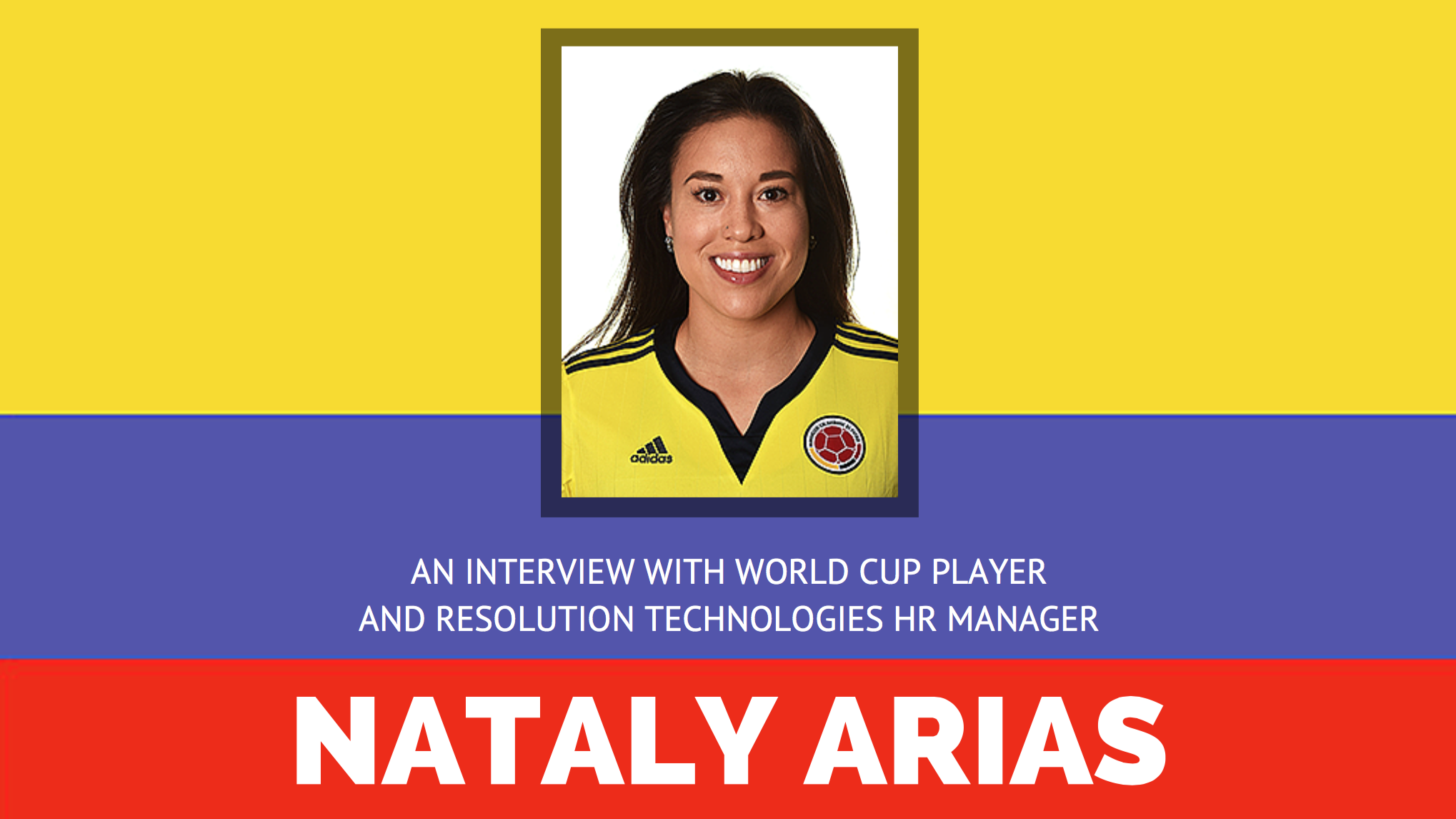 One of our very own, Nataly Arias, just finished competing for the Colombia National Team at the Women’s World Cup in Canada. Our Marketing Intern, Jordan Tucker, had the chance to sit down with her to discuss her experience and what she’s looking forward to next.

J: Can you start off telling me a little bit about yourself: where you’re from, where you went to school and how you got here to Resolution Technologies?

N: I was born in Arlington, Virginia and was raised in Alexandria, VA. I went to college at the University of Maryland. My boyfriend moved down here to work for Coca-Cola, so after the Olympics, I moved down here and have now been in Atlanta for about 2 years. I worked a temporary job for three months and came to ResTech after that and have been here ever since, working as the company’s Human Resources Manager.

J: You just competed in the World Cup for Colombia. What got you involved in soccer in the first place?

N: I started playing when I was 4. My dad played professionally in Venezuela, so there was always a ball around. I loved to play from the beginning just for fun. It was a great way to meet new groups of kids. At first it was just about liking it, having fun, and running around. I started playing more competitively around age 7 when I was on my first club team.

J: You said you first played for fun. Once you started playing, did you ever think you’d get as far as you have?

N: At first, it was just about having fun and playing with my teammates, enjoying tournaments and traveling. Getting that trophy at the end was the motivation. I didn’t really start to have high aspirations for playing until I was probably 10 or 11 when I was able to see some international games and US National Team players. I always followed the men’s Colombia National Team, and seeing their success in the early 90s was really fun to watch. I started thinking, if men can represent their country, then I can too. I can play, and I love it, and I was willing to put in the work and the time because I never thought it was training. I just thought it was fun, so I always loved the aspect of working and getting better. I was thinking, “let’s see how far we can take this.” And then at that point, it was like let’s work towards getting into a college and getting a full-ride. Hopefully I’d get to the national stage and go from there.

J: Tell me about your experience at this year’s World Cup. What were your favorite parts, and what position did you play?

N: I’m a center-back, so I’m a defender. This is my second World Cup. I’m getting close to 50 international caps for my country. It’s always difficult for me to describe how it is or how it feels to be there because it’s a flood of emotions all the time. Our goal as a team was to go and make history. We wanted to go further than we’ve gone before. The last World Cup was a great experience for us because it gave us the experience to come back and be able to really challenge other big powers in the Women’s games. This time it was small steps — let’s win our first game, score those 3 points, score our first goal, get out of the group stage. So things like beating France (the #3 team) as the #28 team in the world got us noticed on the world stage.

There’s absolutely nothing more satisfying than representing your country in this way. As an athlete, that’s what we all work for. After all the hours of training, hard work and discipline, when you’re standing in front of your fans and your family singing the national anthem, it’s one of those moments when it’s hard to focus after because you just feel so good and accomplished. But then it’s time to play 90 minutes and leave everything out on the field. It’s an incredible honor to be included in the best female players in the world and compete at that level. There’s all that passion and intensity to be able to show people that the women’s game is growing.

J: Why Colombia? Why didn’t you play on the US National Team?

N: I grew up in a multicultural home, with my dad being from Venezuela and my mom from Colombia. Although I’m very proud of the fact that I’m a first-generation American, the culture of Colombia was always one that was close to my heart and that I associated with the most. When I got the chance to try out and play for the Colombia National Team, I couldn’t pass up the opportunity. Even though I wasn’t born there, I still bleed yellow, blue and red like the rest.

J: What do you think is the best part of playing on a team?

N: The best part of a team is that you really get to know people at their core. We all get to smile together, but we all suffer together too, whether that’s fitness training or weight training. We all get to pick each other up, and it’s just a lot of trust and confidence in each other. Whether you are a part of a sports team or a team at work, it’s important to work together and support each other.

J: If you had one piece of advice for someone trying to pursue their dreams, whether that’s in athletics or in their career, what would it be?

N: I would say never give up on your dreams. The only one holding you back from what you want to do is yourself. I think you can do anything you set your mind to, and the sky’s the limit. Whatever you’re wanting to accomplish, work hard at it and practice as much as you can, and you’ll eventually get to where you want to be. When playing soccer, ultimately, I do it for the younger generations so that they have a place and so they can say that they want to play at that level. There were little girls all over the world that were hopefully able to watch and have that drive and passion to say, “I want to get there someday or play in an Olympics.” That’s why we do it. We were those kids that didn’t maybe have those players to look up to, so we want to play to inspire them to pursue their passions and goals.

What’s next for Nataly?

She leaves on Wednesday, July 8th for the Pan Am Games in Canada, another Olympic-style tournament. Colombia will face Mexico on Saturday, July 11th. Nataly also hopes to compete in the next Olympics — Rio 2016 in Brazil.

Here at Resolution Technologies, we understand that serving our clients and consultants is what matters most and promise to never lose sight of that! We take the time to understand your individual needs through face-to-face interaction and strive to always make sure your objectives are met. Resolution Technologies is a full-service Information Technology Staffing firm offering flexible solutions for our clients ranging from contract, contract-to-perm, and direct perm placements. Whatever your needs are, we promise to provide unrivaled quality and service.

Nataly Goes to the Olympics

How To: Dress For Interview Success

Should I Be Tweeting Professionally?
Scroll to top